The stars shine brightest on the darkest of nights

What do you think of the blog title? It's probably going to be a title of a piece of work that will happen one day. It could easily be substituted for 'When the going gets tough the tough get going', or more accurately 'When the going gets tough, the tough have a meltdown'. I admit I've had a few tricky weeks lately and when there's not much positive to say, I don't always feel inclined to blog. Who wants to read the naff stuff after all? If medical updates are not your thing, skip down to the end of this post where it all gets more chipper with Ruby Star quilt news!

So the chemotherapy really began to take it's toll around cycle 6 and 7. My body just decided 'nope' it had had enough and I was struggling to recover after each dose. The chemo blasts all of you, knocking down your good cells too. You have to recover well enough for blood tests to show full blood count, white blood cells, liver and kidney function are all just fine before you have have the next lot. I know more about white blood cells, platelets and neutrophils than I ever thought I would. Mine wouldn't all play ball, all at the same time, on blood test days. Even if you're just 0.1 under the magic line for any test you get sent home. This led to a three week gap between treatments which left me feeling helpless and hopeless.

The oncologist advised a dose reduction and after a short debate where I eventually conceded that despite my late night Googling marathons, he probably does know more about chemo than me, and so I relented and agreed. Since then I've had two reduced doses and, touching wood, I don't feel as bad so let's hope it means I stay on track and get this treatment done in a timely fashion. I'm also having some injections which forces the bone marrow into overdrive to make more white blood cells. The result of which ranges from no pain at all, to not being able to move, but if it does the job I can take it! Fortunately Jamie has reprised his role as nurse to administer the injections and save me from more trips to the hospital.

All of this makes me acutely aware of how chemo works. I think it would be fair to say, it's a bit of a one size fits everyone approach, and there's quite a bit of trial and error. The injections work, but it's taken experimentation to get the dose and timing right. The chemo hopefully works, but the oncologist tells me that everyone will react differently and a certain dose for one person won't be right for another. There's an element of throw stuff at me and see what sticks. I'm fine with that, I'll try anything. I constantly read a lot about emerging practice and new treatment research. There's talk of an approach for patients in the future that doctors will take a bit of tumour and grow it in the lab so that the treatment plan can be rehearsed in the Petri dish rather than on the patient. Isn't that a great idea? Ruling out what won't work and will waste time and cause the patient lost time and distress, refining the combinations and doses of drugs for best effect. It just goes to show that the real battle isn't for the patient to fight, but in the research labs.

So, there we are. I've had cycle 9 this week of 12 so there is some light at the end of the tunnel when it comes to this initial treatment plan. After that, there's no knowing what the future holds. It's a waiting game with scans and blood tests to monitor the cancer. I'm an optimist but also a realist, hence the occasional meltdown. A friend of mine is a big advocate of therapy, whether you think you need it or not. The nurses have suggested some counselling too. It's all there available at the hospital you just book yourself in. I might give it a try. Probably better to vent at a stranger than my beloved nearest and dearest.

People talk about fighting the fight and winning. That's hard when it's your own body you're fighting. Why is it doing this to me? Why did the self-destruct button get flicked? I don't feel like it's a fight that I can help with. I think that is done in the labs and the hospital. I just have to turn up and do what I'm told. Hopefully that, and all the midnight deals with the devil that I've been doing will be enough.


I've been sewing almost daily on the ruby star quilt. It's a slow project! Why on earth did I choose 1" diamonds? I think they get smaller and more fiddly each time I pick them up. It is looking lovely though! I've been working in rows, and chunks, making smaller units then sewing them together to the whole. There are some lovely touches of gold in some of the fabrics you've sent and that's adding a gorgeous richness to the overall effect. 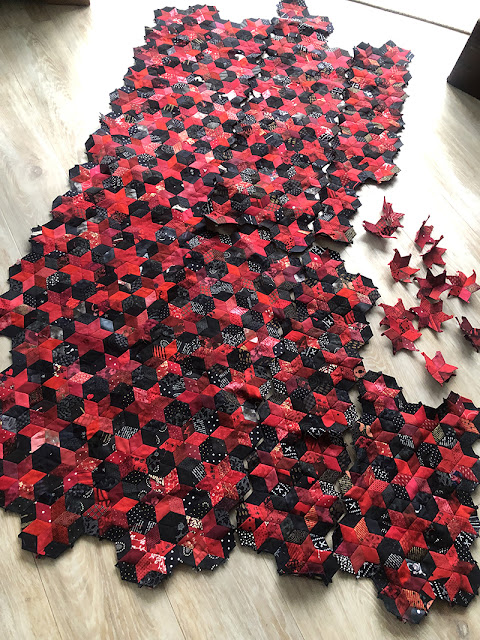 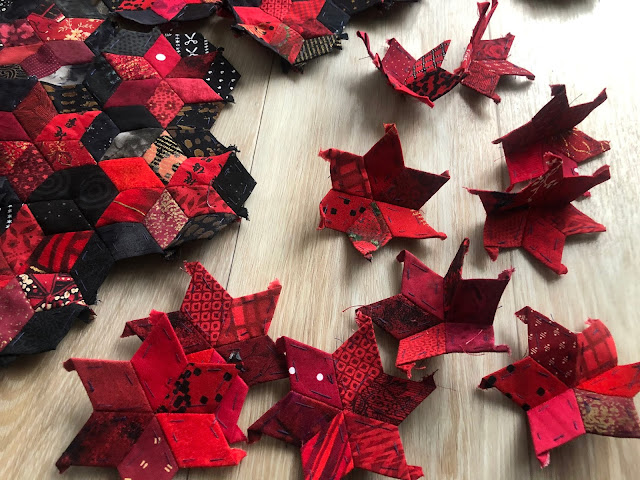 Next year I'll be selling tickets for a prize draw to win the quilt, and some amazing other prizes. Lingen Davies, the charity whose appeal I'm raising for are helping me organise the draw and we hope to have tickets for sale, late Spring, early summer 2019. Of course I'll be relentlessly telling you about it so there's no danger of missing the information!

I'll start telling you about some of the other prizes now...

Husqvarna Viking, who have always been massively supportive of me and my work, have donated a brand new Epic 980Q sewing machine. It's their top of the range sewing machine with a recommended selling price of £4499. Isn't that amazing!

I'm quite blown away by such a massively generous donation. Thank you Husqvarna Viking, you are the best!

Thanks for dropping by today.
Love Laura
xx

My Just Giving page can be found here. All donations, very gratefully received.