It's been a while, but you might remember that at Fashion, Embroidery & Stitch we were generously loaned one of the new Pfaff Powerquilter machines for our demonstrations. Lots of visitors asked what I thought about it during the show and at the time I promised to write a little review here on the blog, well, finally here it is! I should have taken some specific photos to show you the features, but you know what it's like at exhibitions, either there's not enough time, or I'm not organised enough. I've got a few photos that I took showing the machine generally which'll give you an idea of it's looks. 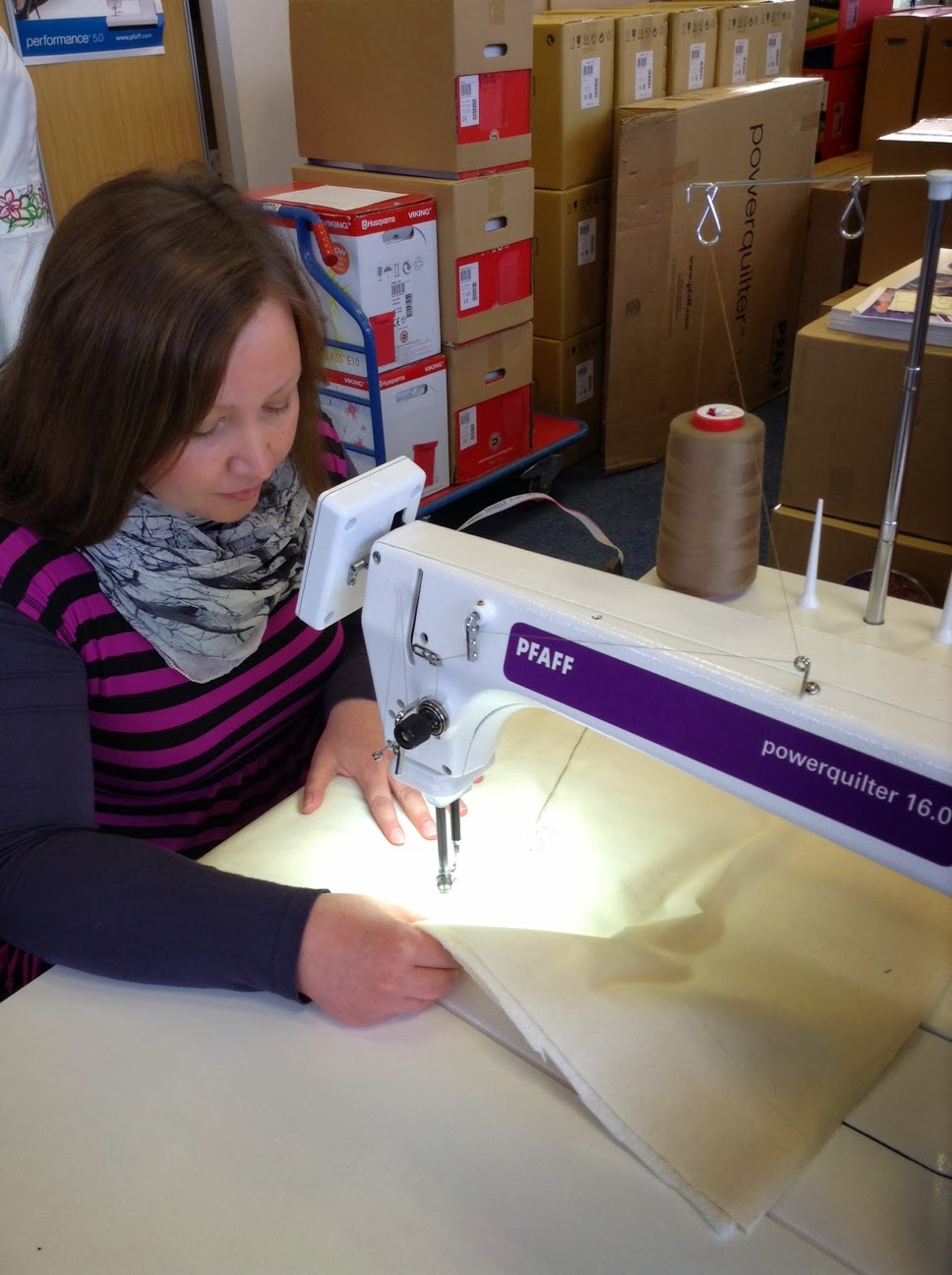 As you can see, you sit at the machine, not in front of it like a regular domestic machine, but to the end like with a longarm. I suppose if you've not used a longarm, that would seem a little odd at first, but you soon get used to it. On the top of the machine are four spikes to hold the thread. I like very much that you can easily use the large cones of thread. Better still, underneath is an M bobbin which has double the capacity of a regular machine bobbin which means only half as many stops to wind another.

The thread stand is mounted on the side of the machine rather than at the back so it's easy to reach when changing thread. I always tie a new thread on and pull it through rather than threading from scratch. The bobbin winder is a separate box of tricks. In one of the photos below you can see it right at the bottom. It's on the sewing table here, but it needn't be, it's completely separate.

There's obviously plenty of room to work and the visibility of the needle was great. Sometimes a darning foot can be a bit bulky and obscure the view of the work. This is problematic when working with closely spaced patterns, but I did some very tightly worked stitching and I didn't lose my place, even when stopping and starting demonstrations. 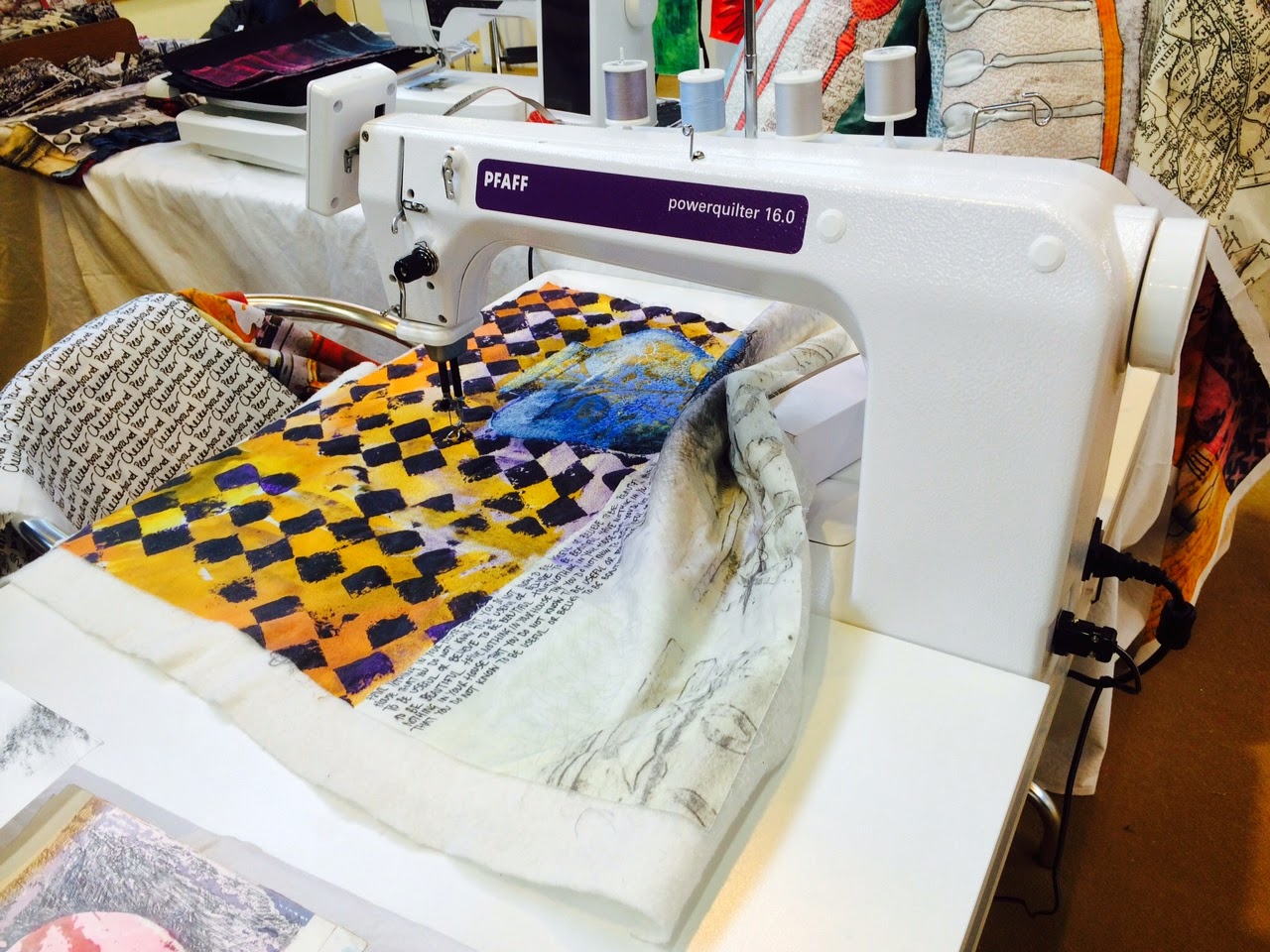 There's a nice bright light, I think it's LED. We were exhibiting in the NEC and the lighting there varies there throughout the day. What can be quite good in the morning, becomes a dark spot in the afternoon. Have to say, didn't notice that with the machine lighting, the quality was just as good all day long. 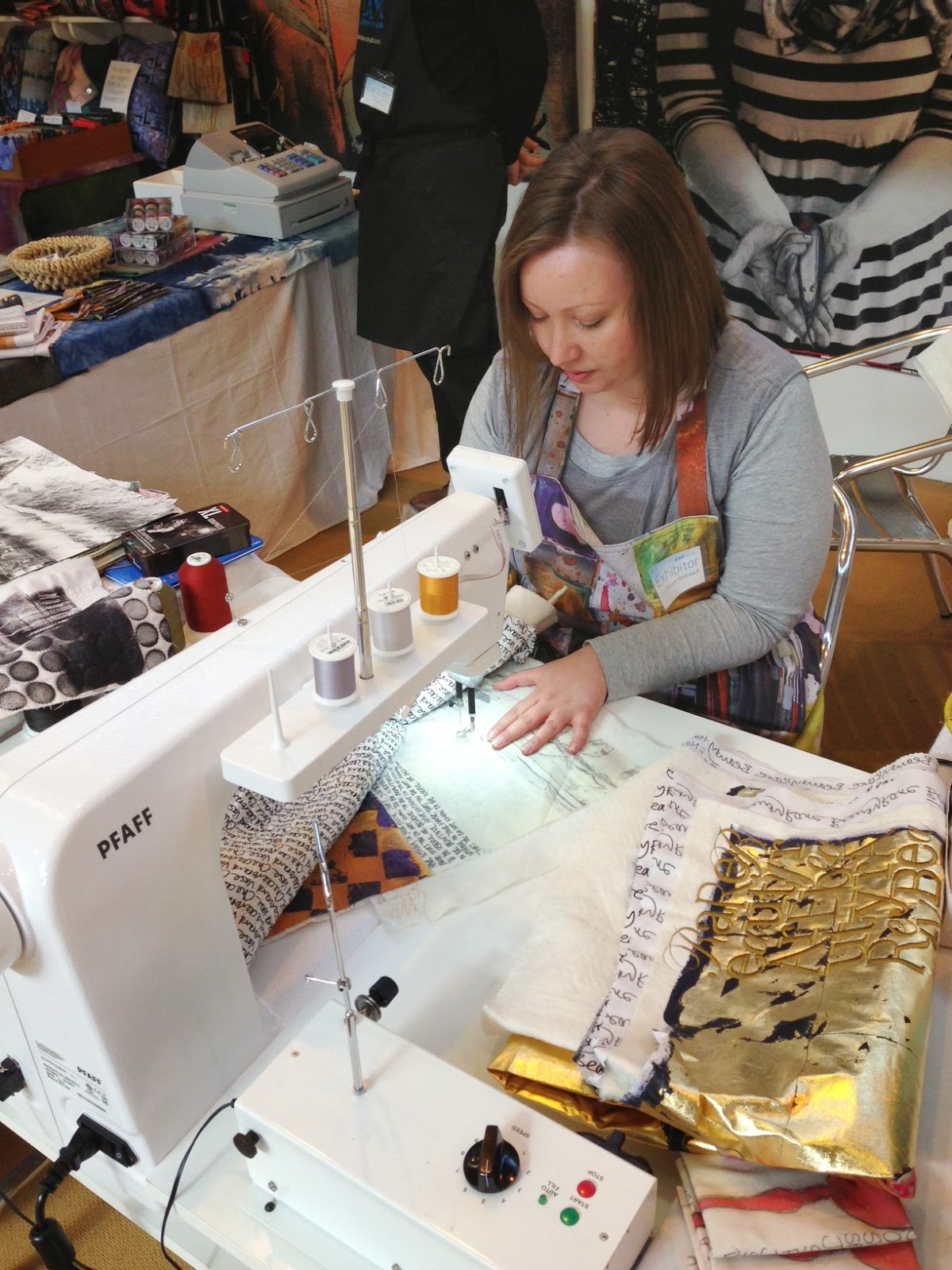 The machine comes with it's own table. I've borrowed this image from the Pfaff site as I hadn't taken one showing the table empty. As you can see it sits flush and there's plenty of space even for a big piece of work. You can get extensions apparently, but to be honest, if you needed extra support for a really big piece of work then you would just place any table next to it. The machine table is height adjustable.

So what's my verdict? Well I have to say I was really impressed! The whole machine feels very solid. That's also true of the table and even when zipping along there wasn't any dreaded table bounce. There aren't any bells and whistles, it's a basic machine, but basic is good, just what I'd look for in a quilting machine. All I want is for an excellent stitch quality, sound build and confidence that it'll stitch day in day out without problems.

There is an option for a stitch regulator. I tried it and to be honest I didn't like it. I don't know if that's just because I'm used to not having one. I'd probably not bother with that feature and save some spends for something else. The machine itself is an investment purchase, but from what I can see so far, would last and last and be a real workhorse.

If you'd like to read a bit more about the machine and find where a dealer is etc. then here's a link to the Pfaff website: