I daresay it might be some sort of hideous virus that is causing the russet on the apples on our old fruit tree to appear with this lace-like effect, but I think it looks beautiful nonetheless! 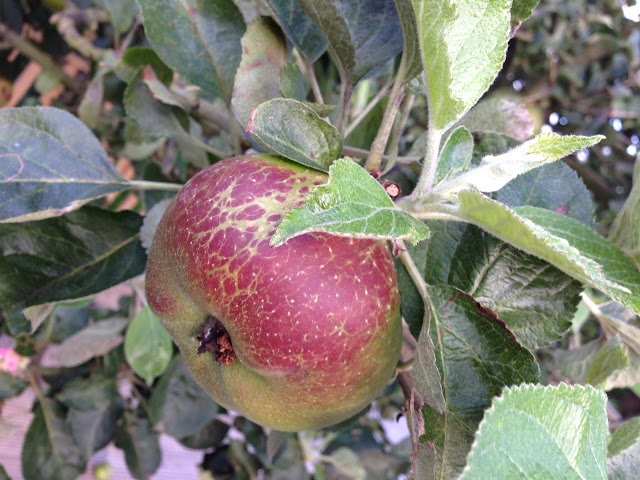 There are almost as many on the floor as left on the tree, but some are reaching a good size. Apple crumble coming right up.

I love this time of year, the weather's warm enough to still wander outside in the evenings without feeling a chill, but cool enough to work in without melting. Mom and I taped for DMTV this morning and also worked on ideas for new projects. We've been working on book ideas for ages, well pretty much since The Painted Quilt came out. Some are very vague, but others are already at quite a detailed stage with chapters and flat plans all set out just waiting for a little flesh to be added to the bones. We've been deliberating between self-publishing and being published. There are obviously pros and cons for both, but we've decided, for the next one at least, to self-publish. I love doing the layout and thoroughly enjoyed doing that for the thr3fold journals we wrote a few years ago. This week I've been working on a catalogue for Through Our Hands and I've got the bug again. Getting sidetracked from that I went back to our book plans and worked on those last night. Today Mom and I had one of our typical planning meetings, here's how it goes...

Laura: "Mom, I've worked out the chapters titles and content for a new book idea."
Linda: "That sounds good. Can I do anything to help with it?"
Laura: "Well, you could write it."

And so off we go. Our printer is working on quotes for the printing and we're getting down to the nitty gritty of the words and pictures. It's not easy to get out and about teaching lots of workshops anymore, but writing a book, or at least doing work to be featured in the book is something that I can fit around Amelie's routine and as we're self-publishing there's no pressure of deadlines to get things done. It'll just be ready when it's ready. 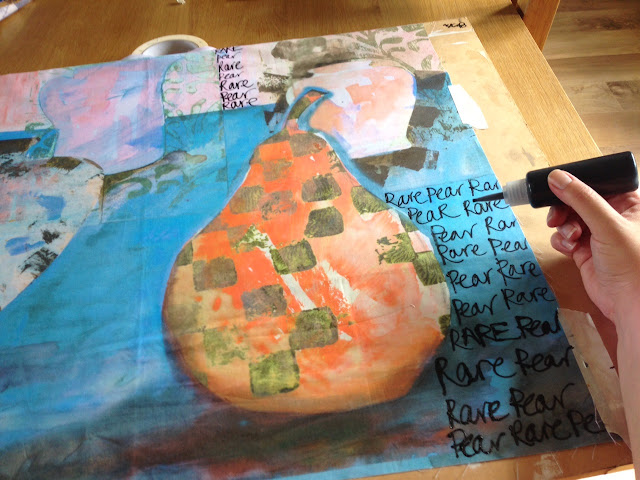 I've also been making some new examples for my workshop that's happening on the 1st September. It's called TXT Message and is all about different surface decoration techniques for getting text onto fabric. There are loads of different methods and so we'll focus on the ones that I use most often and that are quick and effective. Here I'm adding some text to a digital print using fabric paint in a bottle with a fine nozzle. It can be a bit hit and miss until you get a feel for the consistency of the paint and how much to squeeze the bottle, but I've learnt to embrace the occasional blob as part of the look! 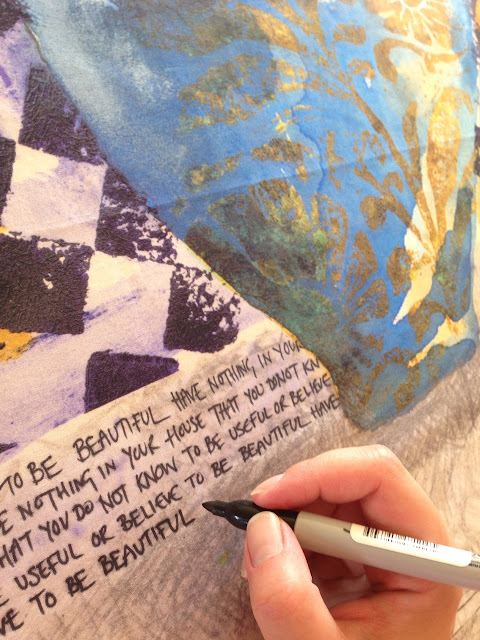 Also in the class we'll use methods that are much more controllable and also explore ideas of changes of scale and media. Here I'm just using a permanent marker to write direct to the fabric. I'm using the same phrase over and over. Have you ever written the same word loads of times? All of a sudden I'll find that I've forgotten how to spell a word or the word will just look completely wrong! I'm pleased to report there were no mistakes in this piece, well, none that I've spotted so far. The scale of this writing is quite small and I'm not sure how I'll quilt it as yet so I'll have to give that some thought.

Thanks for dropping by,
Laura
x